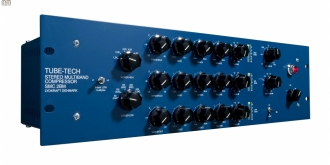 On SMC2BM all audio controls feature High Quality switches,fitted with precision resistors, to ensure extreme accuracy in settings and recals.

The SMC2BM has become one of the favorite mixing/mastering compressors for many top mastering engineers around the world. The sound of SMC2BM is the same as SMC2B.

The design of the x-over networks optimizes the summing of all three bands, resulting in a flat frequency response (within +/-0,25 dB), when the gain controls for each band are set at the same level.