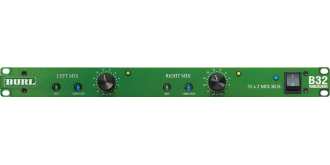 VANCOUVER Island in Canada’s British Columbia is a lush, fertile land of epic proportions. Teaming with wildlife and forests, life thrives in a temperate climate drenched with the precipitation of the North Pacific. The city of VANCOUVER on British Colombia’s mainland is a booming metropolis at the base of the Cascade Coastal Range. Known for its mind altering substances, VANCOUVER is a hot bed for creativity.

BURL AUDIO introduces its latest hot bed of creativity, the B32 VANCOUVER, a 32 channel mix bus. Based on BURL AUDIO’s renowned discrete analog, class-A circuitry, the B32 Mix Bus employs both the transparency of the B26 ORCA, plus the switchable tonality of the new BURL AUDIO BX5 output transformer.

In addition to the BX5, the B32 VANCOUVER introduces a new concept to the summing amplifier, GAIN BOOST. Adding gain boost with the BX5 will give your mixes that glue that you have been seeking ever since retiring your 2-track analog recorder. With 32 input channels and switchable tonality, the B32 VANCOUVER will allow your mixes to thrive in depth, warmth and clarity. Use the B32 VANCOUVER in conjunction with the B1 MIC PREs, the B80 MOTHERSHIP and the B26 ORCA and you will achieve THE COMPLETE SOLUTION.