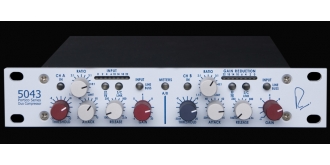 The 5043 Duo Compressor/Limiter is a powerful approach to dynamics processing for the Portico Series, designed with both tracking and mixing applications in mind.

The Portico 5043 embodies two independent Compressor-Limiters (Channels A and B) housed within a half rack, 1U module. They can be used independently (on two distinct tracks), linked as a stereo pair, or connected in sequence to provide two separate control slopes. When used as a stereo pair, linking the DC control circuits via the front panel A/B button enables the level of each channel to be held in a constant relationship. Rear panel TRS connections are provided to link multiple 5043s. This linking may also be extended to some of Rupert’s former AMEK CIB and DMCL units.

When used in sequence, the Portico 5043 can be configured easily to provide dual slope compression and limiting as suggested in the graphs below.

Any number of Portico modules that are equipped with the "TO BUSS" button may be sent to the BUSS input of the 5043 which makes it the ideal choice to form the core of a simple and cost-effective Portico mixing system. The Line input, when selected, provides a dedicated, transformer-balanced 10K impedance bridging input so that the 5043 may be inserted or included in any appropriate part of the signal chain at Console line-up level.

To control gain, a V.C.A. or Voltage Controlled Amplifier (or Attenuator) is used. There are many types of voltage control devices, including tubes, discrete and integrated solid state circuits and naturally non-linear devices, each one having its own characteristic behavior that reflects sonically on the final performance, providing a character or signature that can be musically attractive (or not!). The Portico 5043 makes use of a very accurate, low noise, low distortion V.C.A. having essentially no signature of its own.

GAIN range provided is from -6dB to +20 dB. ?As already noted, when compression has taken place, it may be necessary to increase the overall gain to restore the apparent program level

When the LINK Push-Button is engaged on both channels and the two channels, A and B, set to approximately the same values, GAIN control on both channels will be the same to preserve Stereo balance, levels normally being controlled by the channel with the higher signal level.

When the LINK Push-Button is engaged, the signal passing through, channel A, may be used to control the amplitude of channel B. For example, the level of music through channel A can be controlled by speech on channel B, i.e. reducing the music level to make a "speech-over" announcement.

Two Peak LED METERS are provided that show OUTPUT LEVEL and GAIN REDUCTION. These are switched between Channel A and Channel B on the central METER SELECT Push Button.

Output level meter covers the range from -10 to +22 dBu and above which is regarded as overload.

REDUCTION is calibrated in dB covering the range +1 to 22 dBu, reading from right to left,