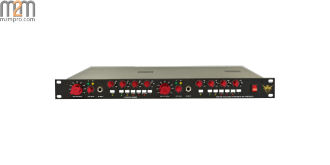 Available in mono (1/2RU or 500-series), stereo (1RU) or in 8-channels (2RU), the Phoenix DRS Mic Preamp/DIs take a modern approach to Class-A circuit design that delivers a wide range of tones without sacrificing the beloved vibe of true Class-A design. The unique DRS circuit can go from ultra-clean sounds suitable for audiophile recordings all the way to the warm, saturated tones reminiscent of the UK's most heralded vintage designs. Versatility and superior sound have made the DRS Preamp/DI a top-tier choice for engineers around the world and a modern day classic.

Our exclusive electronically-balanced, transformerless mic input circuit delivers fast transients and the full frequency spectrum (from sub-bass to the highest air band), while still delivering the full, warm and smooth characteristics that make engineers love Class-A mic preamps. Boldly outperforming transformer-based designs in both the frequency response and slew rate, the DRS delivers articulate, punchy and full-bodied input signals, allowing you to drive the output stage for a vast range of pure Class-A tones—from bold clarity to vintage warmth, and everything in-between.

Our custom-wound DB694 output transformer is coupled to Phoenix's proprietary, fully discrete DSOP-2 output amplifier. The DSOP-2 is a direct descendent of the venerable TF1 amp which Phoenix's head-designer, David Rees, developed as an upgrade for vintage Neve modules. Going beyond the TF1, the DSOP2 is the pinnacle of Class-A output circuit design, offering up a smooth transition from ultra-clean to beautifully saturated tones.

The DRS-1, DRS-2, DRS-8 and DRS1R-500 include very high input impedance DI circuits (10Mohm)—remarkably featuring no FETs—on every channel. This design means that guitar and bass pickups are not loaded, allowing the natural sound of both modern and vintage instruments to shine and actually enhancing the sound, sparkle and growl as if they were plugged into your favorite amp. Synths, drum machines, and even laptops can likewise be sweetened by the DRS's DI.

Easy and Intuitive In The Studio

Because you're working with a clean, robust, electronically-balanced input signal, the DRS Mic Preamp/DI makes dialing in your exact sound easy, intuitive and quick. By working the familiar stepped input gain control (up to 70db alone) and the -30dB pad against the variable output fader (which provides an additional 10dB of gain), you can dial in your preferred tones without having to consider an overly complex gain architecture. It's all about driving the versatile DSOP-2 output stage to your exacting tastes, whatever they may be in any given moment. Like so many other engineers, you'll find yourself reaching for the DRS Mic Preamp/DI over and over again to reliably deliver a vast array of outstanding sounds for any instrument or voice you're recording.

An EQ As Versatile As It Is Unique

Phoenix Audio's DRS Gyrator EQ (as found in the DRSQ4 mk2) is one of today's most unique and musical EQs, allowing an incredible variety of sounds useful for everything from clean high-headroom mix buss tone shaping to deep frequency carving to smooth Class-A circuit saturation. Available either as a mono 500-series module (running at 24v) or coupled to two of our remarkable Class-A DRS Mic Preamp/DIs in a stereo 1RU unit, the DRS Gyrator EQ is as powerful as it is fun to use.

The Gyrator EQ was first developed during what most consider the golden age of solid-state analog audio design: the 1970s. Originally designed to emulate the characteristics of an active inductor EQ (think Neve, API), the Gyrator EQ uses a rather clever combination of an amplifier, resistors and capacitors to accomplish incredibly smooth and musical frequency modifications. The modern-day Phoenix DRS Gyrator EQ gives you High, High-Mid, Low-Mid and Low frequency bands, each notched to proven frequencies from a shimmering 15kHz on down to a thumping 40Hz. There's also a high pass filter at 80Hz, which can eliminate rumble or be used "against" low-end boosts for an extra range of unique EQ curves (think: Pultec). Even at extreme boosts and cuts, the DRS Gyrator EQ's uniquely musical filters maintain the core quality of your original signal, allowing you to make bold, gut-level EQ moves that won't sound harsh, slurred or out of phase. Used more subtly, these four filters are capable of highly coherent tone shaping suitable for full mixes and mastering.

Phoenix Audio's renown DSOP-2 output amplifier, with its custom-wound transformer, is able to deliver everything from ultra-clean signals with abundant headroom to fat, fully saturated tones. By lowering the output attenuator and boosting the input signal, one can drive the DSOP-2 output stage for a wide variety of lush, Class-A saturation. Or, do the opposite—back off on the input while boosting the output—and you'll get huge, clean, hi-fi tones. Many engineers even use the DRS Gyrator EQ completely flat in order to simply add the musicality of our proprietary amplifier circuits.

Versatile And Effortless, Day After Day

The DRS Gyrator EQ is a powerfully versatile, high-quality studio tool. Unlike many Class-A EQs that just do "their thing" due to inherent distortion characteristics, the DRS Gyrator EQ keeps the input signal clean, making it possible for the engineer to keep tones transparent or saturate them to taste. Importantly, doing so is effortless and intuitive due to the DRS Gyrator's straight-forward design and unerring musicality. Those who own this EQ tell us that it quickly becomes their "go to EQ"—used effortlessly every day across a vast variety of instruments, voices and full mixes.