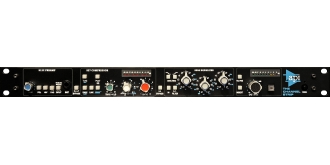 The Channel Strip is a complete input module with mic pre, dynamics processing, precision EQ and output level control. With extensive signal metering, multiple balanced insert points and an output mute switch, The Channel Strip contains the best features of a large console input channel in a single rack space. It's the perfect choice for anyone looking for that high-performance API console sound.

The result of thoughtful engineering, The Channel Strip includes everything needed to record an audio signal. It all starts with the famed 512c Mic Preamplifier, which includes the benefit of additional Mic, Line or Instrument input switching. Next is the 527 multi-mode Compressor with fully adjustable Threshold, Attack, Release, and Ratio controls on detented pots. The patented THRUST® circuit in the 527 gives your track the "in-your-face" punch that has made this circuit an award winner. Also included in The Channel Strip is probably the most recognized and revered API EQ of all time, the 550A three-band Equalizer with its switchable frequencies and 12dB of boost or cut. The 550A's High and Low frequency bands can be individually switched to be shelving EQs, and the "B.P. Filter" switch inserts a 50Hz to 15KHz bandpass filter.

At the output of the unit is the 325 Line Driver, taken directly from API console designs with an output level pot and 10 segment meter. The meter can also be switched to show the output level of the preamp. Each of The Channel Strip's processing pieces can be switched in or bypassed individually, while a flip switch internally routes the compressor after the EQ if desired. Additional features include a sidechain input and the famous API 2520/transformer combination.