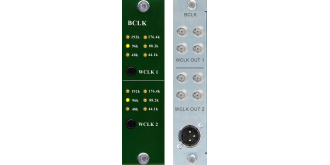 The B80 and B16 MOTHERSHIP daughter card slots can be used for amazing AD/DA conversion, but also for digital IO and word clock output. The BCLK card features 8 BNC style word clock outputs plus an AES/EBU clock output. An extremely low jitter, high quality clock is generated by the BMBx card (Burl MotherBoard) and passed along the BBB (Burl BackBone) to each B80 and B16 daughter card slot. With the BCLK card, a word clock distribution of 92 total outputs can be achieved with one B80 MOTHERSHIP. An added feature of the BCLK card is that it can output multiples of the system word clock. For instance if you are running a 96kHz session, you can output 48kHz, 96kHz or 192kHz from each BCLK word clock bank.