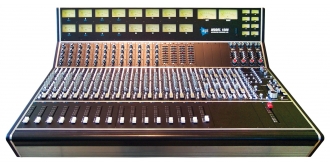 Building on API's rich heritage of extremely high-quality recording consoles, we created the 1608: a full-featured recording console based on the vintage API 1604, which has held its demand and value for over three decades. The 1608 adds new, modern features valuable to today's Engineers, Producers and Musicians to the reliability and sound that API has been known for since its inception; including optional P-Mix automation.

Derived from the API Vision Automation System used extensively in the Vision and Legacy Plus consoles, API now offers an optional motorized fader automation system for the 1608 console called P-Mix. New console orders can be factory-fitted with P-Mix, and existing 1608 consoles can be 'field retrofitted' with new P-Mix automation systems.

Combining system reliability, user flexibility and operational simplicity, P-Mix offers a host of features found only in the most expensive and sophisticated console automation systems costing many times more.